⇐ Back to the beginning of the blog
24.07.2018tags: Article, ICO auditRussian link | English link

The article provides an audit of the ICO on the gamb.io. Analyzed fees, the work of a smart contract and transactions in the blockchain. Only technical aspects of the process are analyzed. The audit was conducted by analysts and programmers CryptoB2B on July 25, 2018. Unfortunately, there are many signs of fraud. Moreover, this is done at a very primitive level, programmers with extremely low experience, which causes a separate censure. In short, all the fees are a lie, and at the time of writing the audit, $ 1 million of fees were drawn from the air and the hardcap suddenly changed from 30 to 15 million. Unfortunately, this company collected $ 74,000 real money in a detachment with trusted investors. The overall result of the technical audit: 0 out of 10, extremely bad.

Do your own conclusions…

Smart contract GAMB for the collection of money in ETH (other currencies in their office was not found) is located at:

We will check the contract Crowdsale or the wallet of the Beneficiary (the variable wallet in Crowdsale) how much money has passed through them, for this, from the Crowdsale address click on the “Read Contract” tab, then on the wallet: 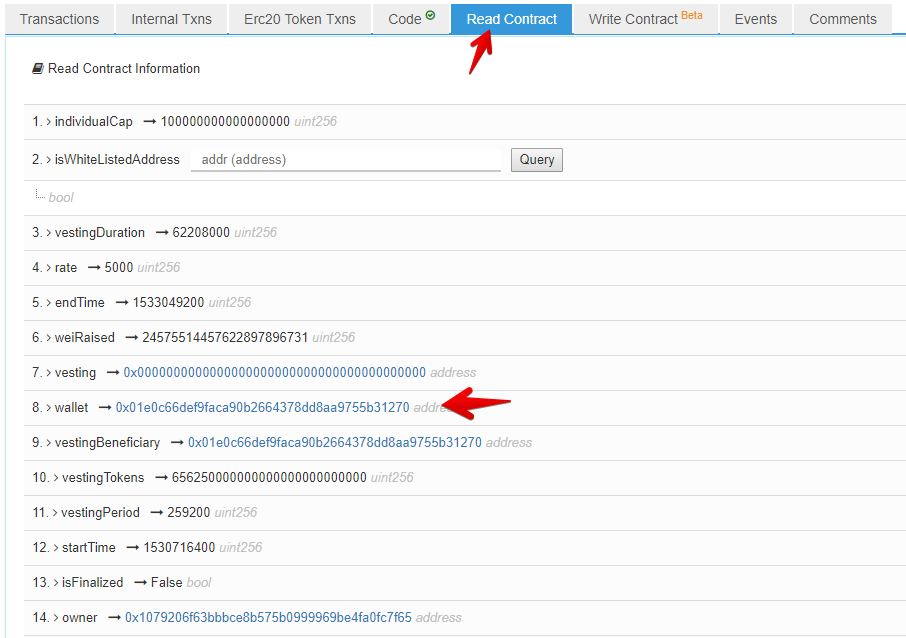 The opened window shows the current amount of the fee:

Why is that? We do not know. The following scenarios are possible:

This is not a vulnerability, but the wasteful stupidity of the smart contract architecture (due to KYC problems that are described below). All numbers are valid on July 24, at the time when their charges were allegedly $ 11.5M.

This is the wallet of the programmer GAMB, from which the smart contract is managed. When another client is registered in the Personal Area and KYC passes successfully, the programmer reports a new ETH wallet to the smart contract. Pay attention – the investor has just registered, has not paid anything (and should not), but the programmer (due to GAMB) has already spent money to copy this information into the blockchain. Obviously, at least ~ 95% of investors will never pay. But the information is already in the Ethereum detachment. GAMB intentionally pours into the locker no one needs the garbage. Remember CryptoKitties and the hang of the Ethereum network? This is the same thing, only meaningless.

Calculations showed that GAMB brought about 13,000 crypto wallets of investors and $ 2,079 was spent for this! $ 2K is a payment for gas to carry out transactions on registration of a personal wallet in a smart contract. Investors have not yet paid, and the founders have already spent money. Of course, against the background of supposedly collected $ 11.5M this is insignificant. But GAMB is an extremely bad example of extravagance, everything can be done differently, for free, not to generate garbage transactions.

You can double-check the calculations by exporting data to this address:

Because they allegedly collected about 30% HardCap, then just for ICO on such parasitic operations will spend ~ $6000 (rough estimate). For this money, you could order a normal smart contract in CryptoB2B, which does not require you to throw money into the air.

Openness of the Personal Cabinet for the sale of tokens

This chapter is not relevant to the analysis of vulnerabilities, but shows a small ignorance of the founders of the project. As if advising everyone else: do not do, like GAMB, to increase your fees. GABM has collected a good amount – but this is not a reason to do the same to everyone.

When you enter the site of the Personal Cabinet for ICO – you immediately come across a registration form. Then do not go through without registering. This reduces some conversion among potential customers. Tip: Do not do this. Show maximum information to the client. Try to lure them first, show a cool and professionally made Personal Cabinet to sell tokens. But do not let a little bit – pay. It’s only after payment. A potential customer may just want to walk around the Personal Cabinet to get information that was not on other Landing pages. The client may want to simply assess the quality and availability of the Cabinet. After all, everyone heard about scam. An expensive and professional product would prove ICO’s solidity. But the client does not let anywhere else the registration forms.

This chapter, as above, is also with advice, not vulnerability. Do not do it like it did in GAMB.

The client after registration can not pay until the KYC procedure passes. Why do they do this? Obviously, lawyers said so. We spend a lot of ICO (more than 350 for 2 years) and we all know it. But lawyers go too far. If the customer has passed the first non-complicated barrier (in the form of registration) and stumbles directly to the second (in the form of KYC) – you kill the person’s desire to give you money. It is difficult to guess how much the conversion decreases and how rich those customers are. Probably, if a person went to register and did not pass KYC, then this is the person who was not completely sure whether to pay or not (otherwise he would have gone through the KYC). It is also likely that this is not a person with a small amount of payment (not exactly a fund or a large investor). It’s very difficult to guess (ICO is still on), but let there be 1000 lost people with a modest sum of 5 ETH, this is $ 2.5M of unassembled fees.

The idea is that lawyers and lawyers should not press on the funder and complicate the life of collecting money, but vice versa, lawyers and accountants should serve as the founder (in reality, the founder of the project “serves” lawyers). If you are absolutely sure of the correctness of this method – your right, ignore this chapter.

So, the obvious advice is that first you need to call the user to pay (without KYC) and immediately give him frozen tokens. Immediately answer the criticism:

If readers follow the path of GAMB, then by the end of the ICO they will be in a situation – ideally done from a legal point of view, only there is no money. Of course, we do not call for violating the law. To this end, the ICO platform Crypto B2B offers five different scenarios for conducting KYC, from the hardest (in the spirit of GAMB) to the most optimal, golden mean between two goals: not to break the law + not to reduce the conversion of collection of money.

Despite the fact that Hardcap is present in the smart contract, however, it can be circumvented and deceived by the investor:

A pawnbroker can extend the ICO for as long as desired until HardCap is typed. Or until the contract is finalized.

Extend to the endlessly ICO, until we collect the necessary tokens.

HardCap is defined in both the smart sales contract and the smart token contract, a limited number of tokens can be issued. Of course, in our ICO platform everything is fair. Absolutely every item described in this article is done differently and respects the rights of investors.

Softcap – a lie, a deception

SoftCap in a smart contract is not defined. There is no code on this subject. All investments immediately go to the wallet of the beneficiary. On the site softcap = $ 5M and it is assumed that if this amount is not collected, then a smart contract will allow investors to withdraw money. In fact, no, they are already in the company’s account.

In a smart contract, there is a standard variable that counts how much money (ETH) is collected. But the founders of GAMB directly changed it, at the very same $ 11.5M. This variable can be changed by real charges, and not arbitrary.

Founders have laid themselves as much as 2 mechanisms to change this number.

First, during the initialization of a smart contract in its constructor:

the following data were transmitted:

Next, the second mechanism. This number before the beginning of the round the founder could change as you like (uncontrollably), thanks to the following code:

Incidentally, note that this is 12 lines of code for changing 1 variable – this is bust and weak code. Enough and 4 lines, in one function. A lot of code needs to be written when the code does something, here it does not restrict the founder in any way, except for double checking by date.

The founder has a method for SAMPLE charging of tokens to his investors. As a result of processing a separate entry, the investor will receive tokens at the base price in accordance with the size of the investment, plus bonus tokens in the amount clearly indicated by the founder.

For example, one investor can make a smaller bonus. And if the founder himself buys his own tokens, then a bonus to such a “buyer” can be done more. In theory, the founder can, thanks to the bonus, free pick up all the not-to-be-read tokens.

On the project site, there are no links to GitHub or another repository where you could get acquainted with the project code. For the purpose of auditing the fund-raising contract and the token contract.

In fact, the requirement to spread code on GitHub is very stupid and archaic. The bottom line is that the code needs to be shown. But it’s better not to GitHub, but to Etherescan. The latter confirms that the code laid out corresponds to the binary code in the blockchain. GitHub, obviously, does not confirm anything and you can lay out 2 different versions, and because of the natural laziness of a person no one will check and compile the code, which leads to potential fraud (on GitHub honest code, and in the case of any other). We mentioned GitHub only because the code was intentionally hidden, not because we are calling for GitHub. On the contrary. Once again, GitHub is NOT for publicly opening the source of a smart contract for the purpose of conducting its audit. This is a very convenient project, for another type of code, for example, for own development of blockchain projects.

Also on the site is hidden the fundraising address for users who did not pass KYC. Which is pretty strange. Require the investor to transfer their personal data without providing him with information on how to raise funds, it is not logical, if there is nothing to hide.

Due to the glaring details of the collection of money, White Paper analysis was not conducted. It makes no sense to spend time programmers Crypto B2B on the search for a technical component of the project. Perhaps, it will be done later. For now we will assume that from the point of view of the idea – the project is magnificent and we wish it success. 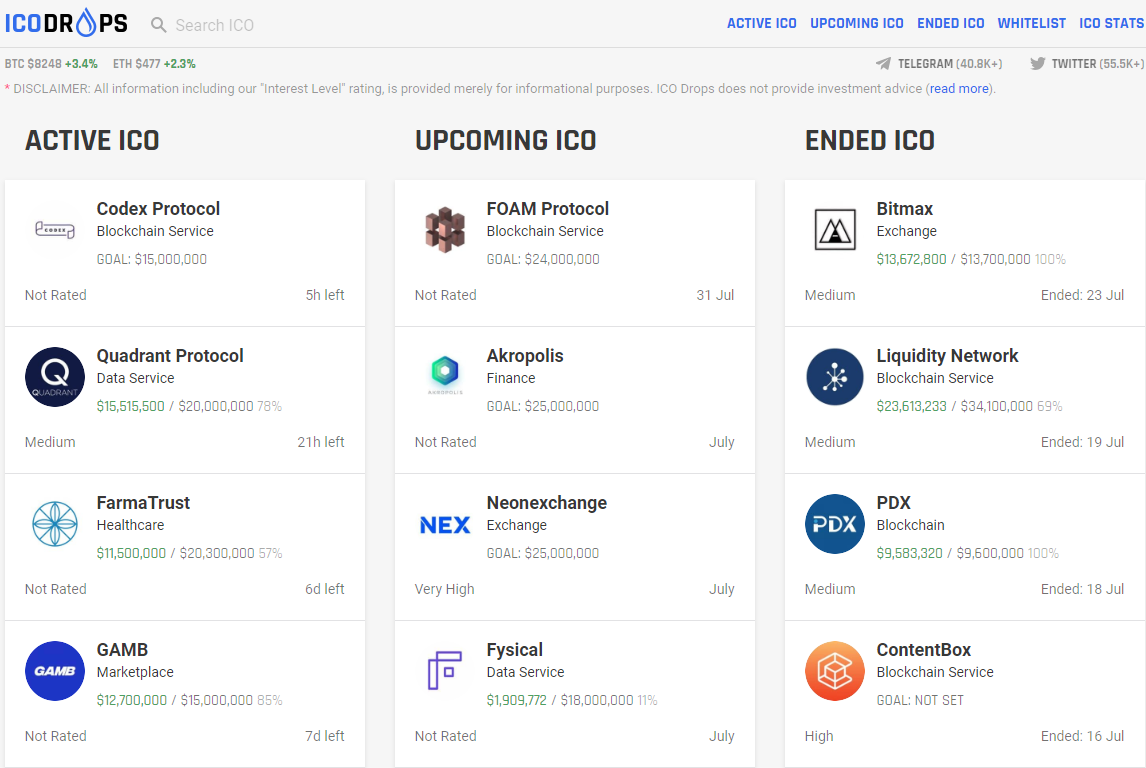 On July 25th, this fraudulent ICO still hangs on ICOdrops.com. Why are they doing this?

First, the founders need to prove the availability of $ 11.5M. And also advertise that they are other millions, and not those that are going through a public smart contract.

The second. It is necessary to completely replace the entire ICO platform. All these drawbacks are missing in the ICO platform from CryptoB2B. But it, unfortunately, would not allow the founder to manipulate fees and otherwise infringe upon the protection of the interests of investors. Judging by the fact that since the opening of the public ICO the company has collected only $ 74,000, probably more than GAMB will not collect anything. Therefore, it is probably late to change the platform because of the obvious failure of the public gathering. Whether there are 11 million or not is not for us to decide. However, we emphasize that all vulnerabilities can be eliminated if the system for collecting money is written by experienced developers.

Technical rating of the GAMB project

The team’s openness to the audit and answers to uncomfortable questions? Hide (negatively), -5.
[-10 = hostility, 0 = not conducted, + 2 = open to cooperation]

The final technical rating of cryptob2b for the sum of the indicators: 0 of 10, the rating is extremely bad.